When was the company started?

Vtech was founded in 1976 by Allan Wong and Stephen Leung, and its name stands for Video Technology Limited. The first product they produced was a TV game console in 1977. For the next 3 years, Vtech manufactured a handful of games and gaming consoles, until 1980 when they produced their first electronic learning product. From there, Vtech would go on to make numerous electronic and digital advancements for educational and recreational purposes. Today, Vtech is one of the leading and largest brands that’s based in Hong Kong and supplies electronic and wireless devices on a global scale.

What types of products does the company manufacture?

What is the reputation of the company's products?

Vtech is praised for having some of the best educational toys for children. It’s also been listed in the top 50 Electronic Manufacturing Services providers globally. Vtech manufactures Safe&Sounds video and audio-only baby monitors that are top-rated and offer an enhanced sense of security for you and your little one.

Vtech audio-only baby monitors let you tune in to every little sound your baby makes from anywhere in the house. Manufactured with DECT technology, Vtech audio-only baby monitors are hack-proof and secure to prevent outsiders from tuning in to your baby’s feed. They’re also equipped with motion sensors that alert you when your child has gone off-limits.

As an added level of comfort, the Vtech audio-only monitors are engineered with LED lights that soothingly light up your child’s ceiling and pre-programmed lullabies that quietly lulls your baby to sleep.

Additionally, Vtech audio-only monitors have a range of up to 1,000 ft., and their digital transmissions work to minimize static and interference so that you always get a crystal clear sound.

Vtech video baby monitors allow you to see and hear everything your little one does with high-quality clarity inside and outside of the house. Their full-color display screens range from 2” - 5” that’s easy to navigate. The built-in speakers let you communicate with your baby with ease, so you won’t have to stop what you’re doing to talk to them.

The Vtech digital cameras are manufactured with a Pan, Tilt, Zoom feature that lets you easily maneuver the camera so that you can monitor your baby from the perfect angle.

smartphone and tablet, so whether or not you’re traveling, or your little one is spending time away with family members for a few days, you’ll always remain connected to them. 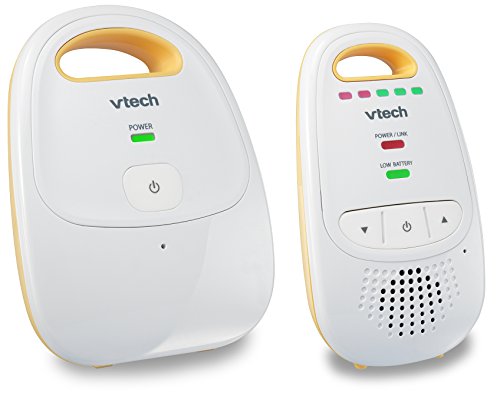 The Vtech DM111 is one of the cheapest baby monitors available on the market today. For your baby’s safety and security, the DM111 is equipped with 6.0 DECT Technology that provides a clear-cut digital transmission and up to 1000 ft. of range. You can set the volume on low, and with the LED 5-level sound indicator, you’ll be alerted if your child is making noise. The more noise they make, the higher the LED lights flash. The DM111 is outfitted with a belt clip, so you can move about the house and get things done with ease, and when your baby makes noise or moves, the DM111 will vibrate.

The Vtech DM111 is perfect for families who are looking for a basic baby monitor with essential features that help them listen closely to their baby. It's also the ideal monitor if you’re an experienced parent who just wants something that’ll alert you when your little one needs you. You may also find comfort in the DM111 if you work from home. If you’re working, noises can be distracting, but the volume control on this audio-only baby monitor gives you the freedom to turn the volume off and still be alerted by LED lights when your baby starts making noise. 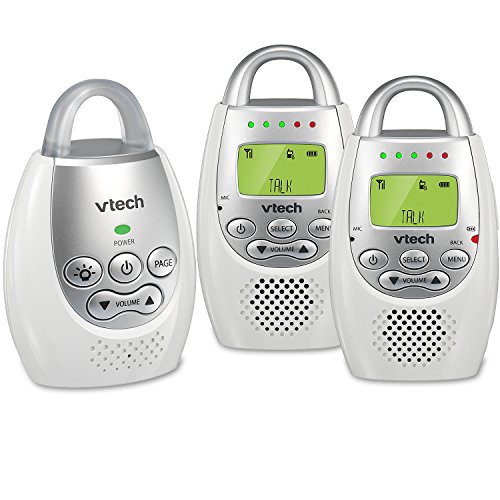 The Vtech DM221 audio-only baby monitor is a reasonably monitor with enhanced features that are designed to soothe your baby to sleep. It’s manufactured with 6.0 DECT Technology to eliminate white noise and the risk of strangers listening on your baby’s feed. The DM221 gives you the freedom to monitor your baby hands-free with a built-in belt clip. Combined with the 1,000 ft. range limit, you’re free to move about your house as you please without the hassle of carrying around your parent unit and the worry of losing connection with your little one.

The simplistic yet high-quality features on the DM221 make it the ideal choice for a parent who is looking for an easy-to-use baby monitor with just the essentials, and maybe a little extra. It’s also perfect for parents who are looking for a baby monitor that will help them and their little ones get a good night’s rest. The soothing array of night lights will send your baby into a peaceful sleep. Plus, the two-way communication system provides a way for you to talk to your baby and lull them to sleep while staying in your bed. 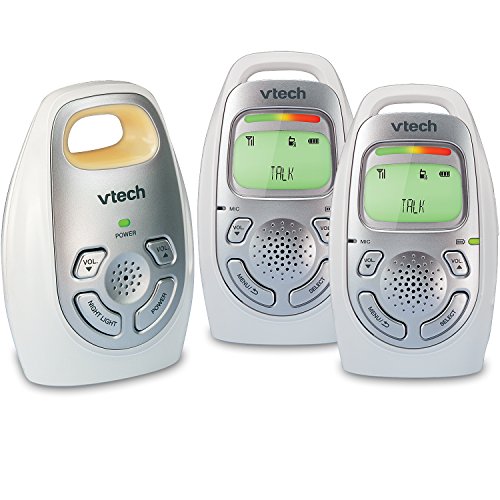 The Vtech DM223 comes with 2 parent units and up to 1,000 ft. of range. With 2 parent units, you and your spouse can monitor your baby at the same from different places in the house. Or, the parent units can be used to conserve battery life. The DM223 is equipped with a vibrating-sound alert that quietly lets you know when your little one needs you. It’s also been engineered with 6.0 DECT technology to ensure a clear sound without agitating background noise. The DM223 has a 15-hour battery lifespan to eliminate the hassle of constantly recharging your parent unit.

The Vtech DM223 is a fitting choice for 2-parent households where both parents want to have the ability to monitor the baby at the same time. It’s also great if you’re forgetful and don’t charge your parent unit. With the DM223, you can always have one parent unit on the charger while you use the other one. Once it dies, you can just swap the two out. Also, if there are different areas of the house where you spend the most time, for example, the living area and home office, then you can place one monitor in each room, thus eliminating the hassle of carrying your parent unit from room to room. 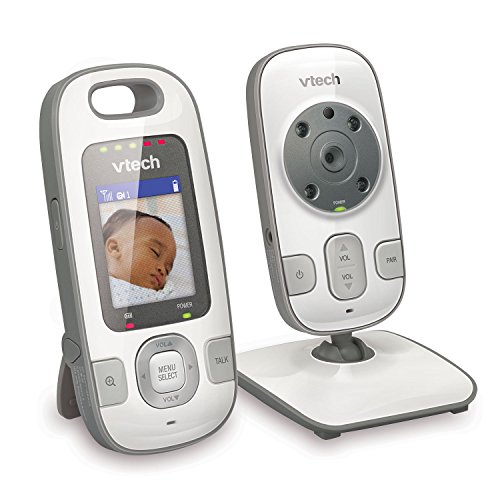 The Vtech M312 has a built-in 2” display screen that lets you keep a close eye on your baby. While it’s basic for a video baby monitor the M312 is equipped with state-of-the-art features including infrared night vision and split-screen viewing that lets you monitor up to 4 cameras at once. The M312 can be mounted anywhere to give you the best view of your little one.

The Vtech VM312 is ideal for families with multiple children. Using the Patrol-screen viewing feature, you can watch all of your kids at the same time without breaking a sweat. With the high-resolution full-motion video and adjustable camera, you’ll be able to perfectly see everything that your child is doing. The two-way communication system will make it easier to communicate with your kids, as well. 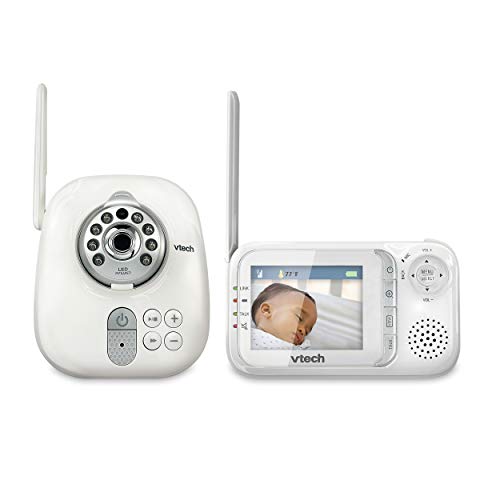 The Vtech M321 has wone several awards with the help of enhanced features that work together to produce a clear and crisp image and sound. Infrared night vision allows you to clearly see your little one even when their room is dark. It’s also programmed with 5 lullabies that’ll send your baby off into a peaceful sleep.

You can connect up to four cameras at a time to your parent unit. With the split-screen feature, you can tap into each camera, and monitor those rooms at the same time. The VM321 is manufactured with 6.0 DECT technology, so you don’t have to worry about strangers hacking into your cameras, and you can say goodbye to irritating background noise.

The Vtech VM321 is also perfect for families with multiple kids and parents who want to keep a watchful eye on their children. It’s a great video baby monitor to have if you’re trying to get your baby in the habit of falling asleep on their own, but you want to watch them throughout the night. The pre-programmed lullabies will sing your baby to sleep, and with the intercom system, you can talk to your little one and calm them down without physically going into their room.

What are the main differences between the models described in the previous section?

Differences between the audio-only baby monitor in the previous section

Differences between the video baby monitors in the previous section

Vtech baby monitors vs other manufacturers

Although Motorola manufactures WIFI baby monitors, and Vtech doesn’t, Vtech does offer a wider variety of audio-only and video baby monitors. Most of Vtech’s baby monitors are budget-friendly like Motorola, but they do teeter on being slightly more expensive than Motorola.

Vtech does have an app that you can use to link your baby monitor to your smartphone and tablet, but it’s not nearly as praised as the Hubble app is for Motorola baby monitors. It’s also not as required to have.

While both brands are leading manufacturers in the world of telecommunication and electronic devices, I would say that Vtech has a better record of topping the charts than Motorola.

Summer Infant is primarily focused on manufacturing all sorts of baby products, unlike Vtech. They also only produce video baby monitors while Vtech deals in both audio and video baby monitors. As far as price, Vtech is by far the cheaper option. Both manufacturers produce top-of-the-line baby monitors with superior features designed to help you keep an eye open and an ear out for your baby. When it comes down to these two, I would advise that you go with whichever company best meets your needs.